The First Lunar Eclipse of 2020 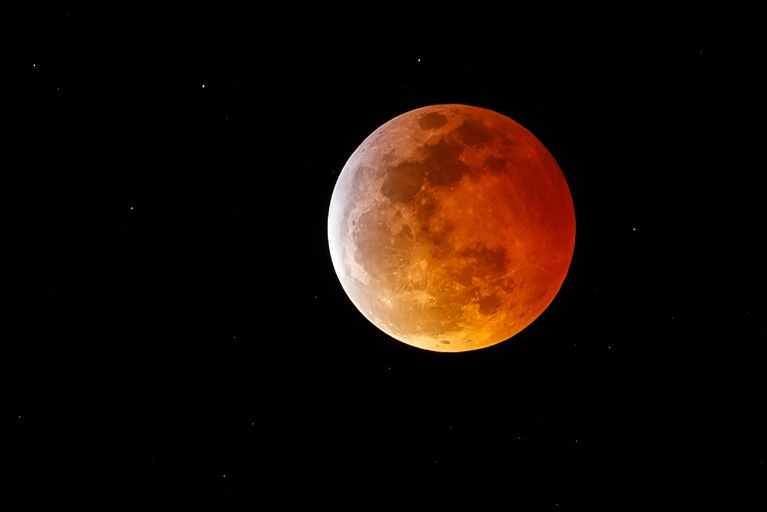 1) The most important thing to do is to avoid taking any kind of initiative. If you're thinking marriage or shifting in the new house, or to apply your ideas and begin a business, this eclipse is just not the time to take up any 'materialistic' activity.

2) Avoid eating and drinking during the eclipse. Fasting is best recommended till the eclipse lasts. Our body cycles alter as the earth drifts away from its fixed position wedging itself between the Sun and Moon. Eating food that's already cooked and exposed to the eclipse should be avoided. Fresh food should be cooked and consumed after the eclipse. Besides, a stomach kept empty during the eclipse will energize the nervous system and make meditation easier to achieve best results!

3) Moon signifies human mind. Looking at the eclipse or getting exposed to its vibrations, could induce negative effects on the person's mental health. Depression, anxiety and other psychological disturbances, and gastric ailments could occur if one directly sees or gets exposed to the lunar eclipse. So it's best to avoid seeing the Moon directly.

4) Donations and charities are always beneficial and one never really needs a religious or scientific backing behind the deeds of benevolence. The way a pebble thrown in the steady waters is capable of creating a multitude of ripples, a single act of compassion can stir the stagnant waters of karma. Whatever goes around comes around. So donate wholeheartedly (of course keeping in mind your economic capacity) and with the good thought. Along with money, white things like rice, sugar, silver, salt, ghee and sweets are given in the charity.

5) Bhagiratha; the king of Ishvaku dynasty called upon Ganga to wash the sins of his ancestors. Flowing through the matted locks of Shiva, She liberated his 60,000 ancestors from the curse of the sage Kapila. 'Ancestors' were the sole reason why Ganga was coaxed from the Land of Gods and brought down to earth. This eclipse provides a perfect opportunity to call upon our ancestors and seek their blessings and liberation.

6) Taking a bath before and after the eclipse is usually recommended but is strictly prohibited during the eclipse.

Meditation and prayer become the key to unlock the hidden potential that this Lunar eclipse hides. While all materialistic activity is thrown in suspension, meditation is the only essential and predominant essence of the eclipse. Chanting mantras create vibrational patterns that significantly affect and aggregate the ‘good’ in the mind. Plain meditation would become mechanical, but when coupled with right bhava and  mantra, it becomes a sharp tool that can slay strongest of the karmic bonds. Out of hundreds and thousands of mantras available, which one to choose depends on the nature of the eclipse. While meditative poses are important to reap the complete benefits of mantars, a simple cross-legged position (chair can also be used for the ones who cannot sit on the ground) is also fine for the ones who have real inclination to chant and experiment what the cosmic sound beholds for them. Here are a few chosen ones that when chanted can give some real cosmic experience. This eclipse, try them out and discover for yourself what they unlock for you!

1) Moon marks the peak point in the 'individuality' of the person. Moon, as a 'Planet of Wax and Wane' governs the deepest emotions and feelings of the human mind. Lord Shiva is called Chandra-Shekhara. He wears Moon (Chandra) as an ornament right at the top (Shekhara) of his head. With Moon sitting on the head of the Primal Being- Lord Shiva, this eclipse gives us a chance to meditate over Him. Chanting the base mantra 'Aum Namah Shivaya' is the best form of meditation that one can practice during this Chandra Grahan or Lunar Eclipse to invoke Lord Shiva.

2) 'Rudra' is the Lord of Destruction. The 'Destroyer' is known to annihilate the inherent desires and passions that humans are born with. Rudra pierces every last fetter that binds one to the temporary world. Listening, reciting and meditating over Sri Rudram is highly beneficial during this Lunar Eclipse.

3) Vishnu is the Nurturer of the Three Worlds. He is the Supporter-the Giver. Before eating or drinking anything after eclipse, chanting the name of Vishnu will purify the food and water which will help the body and mind achieve utmost equilibrium and sense of fulfillment.

4) Ganpati, the Son of Lord Shiva is symbolic of the syllable 'Om'- the primal sound from which everything has emerged. Chanting Ganesh Atharvashirsha invokes Vignaharta; the slayer of all sorrows and obstacles. Reciting this mantra gives rise to eternal peace and hope that someday may we all realize the Brahman-Consciousness that we are.

5) Durga is one of the many forms of Goddess Parvati-the consort of Lord Shiva. She is the Divine Mother, the Shakti operating behind all the hidden and visible worlds. Chanting Om Dum Durgaye Namah 108 times, the Divine Mother is invoked to protect every being of all worlds.

6) Other mantras like Aum Vishnu Durgaye Namah and Om Namo Narayanaya can also be chanted 108 times during the Lunar Eclipse.

With so many mantras around, the selection of the mantra that one wants to chant during the eclipse depends on his/her liking of the particular deity and inclinations. This is the side that's controlled by the Moon; the Manas or the mind from where all the inner emotions are brought forth during Chandra Grahan.

The opening Lunar Eclipse of 2020 holds a very special meaning. This eclipse will be taking place in the Nakshatra of Punarvasu. Punarvasu ideally means 'to come into being'. It signifies the start of life from a distant land; it signifies the coming of Lord Ram from distant jungles back to his abdicated throne. But coming alone is not enough for the circle is left incomplete. One first has to go to be able to come back. The Nakshatra signifies Lord Ram giving up his coronation and 'going' to the far flung territories for the higher good of mankind. With this coming and going, the cycle of life is complete. This is signified by the stars Castor and Pollux in the Nakshatra of Punarvasu.

Being born under this Nakshatra, Lord Ram, rightly testifies the Return or the Renewal. The two bright stars Castor and Pollux placed as opposed to each other signify the duality of Nature. The two dual forces represented by these two stars emphasize the need to neutralize the duality and achieve equilibrium, very much like Lord Ram. Unless the duality does not balance itself, the freedom from restriction can never be achieved which is the central theme of this Nakshatra. This is why Alternate Breathing is highly beneficial during this lunar eclipse. With the right side of the nose the Surya(Sun) Nadi or Pingala and the left side of the nose-the Chandra(Moon) nadi or Ida, alternate nostril breathing will bring balance between the two opposing and extreme forces of Nature. With sun signifying the day and Moon signifying the night, the alternate breathing or Nadi Shodhan will not only purify but also balance the opposing forces that are the key reasons for all the tumult happening in our minds and lives.

Punarvasu signifies hands and nose. While using these two for the purpose of alternate breathing, hands are to be used in the act of charity as well. Whatever is done during this eclipse, will get etched and restored in the deep corners of our consciousness. And the patterns of behavior that we choose during this eclipse will keep repeating itself time and again conducive to the environment and situation. This is why this eclipse is very important. It gives us an opportunity to choose good over evil and positivity over negativity. It gives us a chance to build up our destiny! Once these patterns fix themselves during this eclipse, they will repeatedly keep tapping our reservoir of karma that will automatically coax us on the path that we had chosen. If it's the good pattern that we had consciously selected during this eclipse, then there will be equilibrium that shall enable us to shape our future that's yet unseen.