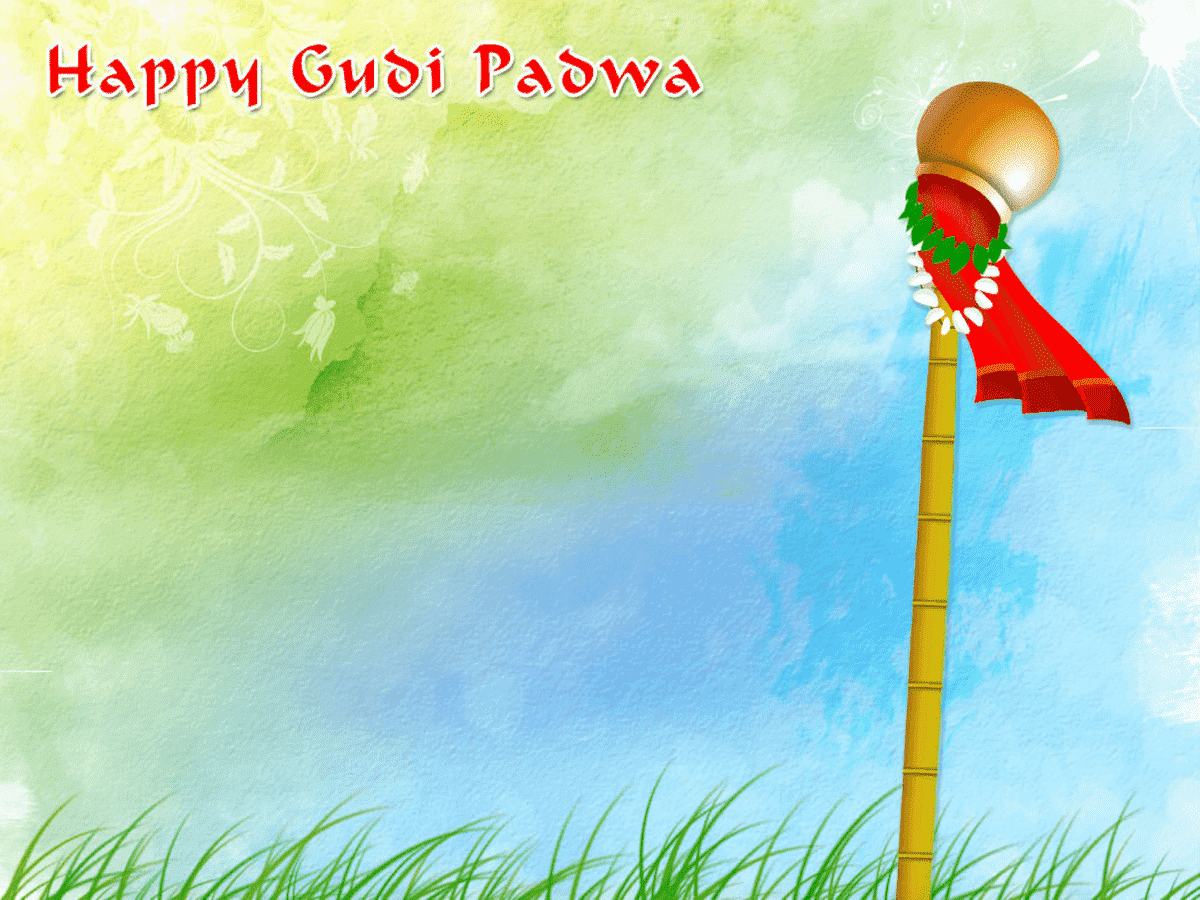 Gudi Padwa, is an Indian festival and is considered traditionally to be the New year for the people of Maharashtra. It brings new dreams and a hope of a better time and prosperity.

Gudi, the word refers to Brahma’s flag and Padwa comes from the Sanskrit word  Paddava i.e. the first day of the bright phase of the moon. It  is a festival of the spring and is celebrated on the first day of the Chaitra month according to the Hindu calendar, which is usually during March-April of the Gregorian calendar.  It is celebrated under different names in Karnataka, Tamil Nadu and Andhra Pradesh.

Going by the Vedic astrology, the day of Gudi Padwa holds greater significance. As it falls under Sadhe Teen muhurta, it is  quite an auspicious period. As per the popular belief, any work carried out during this day will yield positive results.

The festival of Gudi padwa indicates the advent of the spring and the reaping of Rabi crops.

Among the Hindus especially, this day has great significance as it’s believed that on this day Lord Brahma created the universe and thus this day was the beginning of ‘Satyuga’.  This day also marks the coronation ceremony of Lord Rama after spending fourteen years in exile.

People in Maharashtra celebrate this day with great pomp and ceremony. In Marathi, it is traditionally referred to as Chaitra Shukla Pratipada. This day is glorious and holds historical and spiritual significance.

If legends were to be believed, Chatrapati Shivaji Maharaj on this day hoisted his victory flag upon his territory, and thus began the Gudi Padwa festivities. And this festival is celebrated with much fervor and zeal in Maharashtra.

History tales indicate that Shakas defeated the Huns on this day, hence Gudi Padwa also is the first day of the Shalivahan calendar.

On this auspicious day, people start the day by taking a sacred oil bath. Then the floor near the home entrance is decorated with beautiful bright coloured rangolis. A bamboo stick or Gudi is erected at a higher place near the front door or the window of the house. A new yellow or red colour silk  cloth is then tied to it. It is topped with a swastika marked upturned copper, brass or silver vessel which indicates victory, to which is put a garland made of flowers, mango leaves and neem leaves. After the Gudi is worshipped, prasad made up of neem leaves, tamarind and jaggery is distributed among all the family members.

Neem leaves are used here an metaphor for the bitter experiences that we have on our life’s journey. Like neem purifies our blood and boosts our immunity, consuming  neem

leaves on this auspicious day indicates our preparedness to open up and accept unpleasant experiences in the new year with the grave learning that comes with it. In a way, this also hints our spiritual evolution and an inner transformation. It is believed that Gudi brings good luck and prosperity by warding off the evil and negativity.

If we look at it from the cosmic placements too, this holds great significance for the Hindu calendar. On this particular day, the sun is vertically above the intersection point between the equator and the meridians. This marks the beginning of the spring season.

The significance of Gudi Padwa is also seen from an agricultural calendar. In India where agriculture is the main occupation, Gudi Padwa indicates end of one season and beginning of a new. It is the harvesting festivals of India. Farmers consider this day to be extremely auspicious for sowing seeds.

The festival of Gudi Padwa is celebrated in different parts of India and is named differently. It is called as Cheti Chand by Sindhis, while as Navreh by Kashmiri Pandits. In Karnataka it is celebrated as Yugadi, while in Andhra Pradesh and Telangana it is known as Ugadi. The day also indicates the beginning of Chaitra Navratri, which leads to Ram Navami. The rituals to celebrate Ugadi are different than those performed in Maharashtra, although the essence remains the same. Ugadi is the beginning of the New Year as per Telugu calendar.

Another interesting fact being, in different parts of India, there are certain local dishes which are specially prepared for this occasion. In Maharashtra, people celebrate this day with Puran poli, a fried puffy bread called puri and Shrikhand which is a sweet yogurt dessert. Kanangachi kheer a sweet dish made of sweet potato, rice, jaggery and coconut milk is prepared by the Konkanis. While in some parts of Southern India, certain dishes with raw mango is made exclusively for this occasion, the most popular dish is ‘Pachadi’. It is a chutney-like dish which is made with various ingredients to bring out all the flavours like, sweet, sour, tangy and bitter.  It is said, the different flavours here is a reminder that the new brand year and the life ahead will have some sweet memories, while there could be some bitter experiences too. It indicates, one should be ready to face the new year with all the phases it presents and prepares us for the same. It also reminds us, like the changing flavours, all things in life are transitory. Whether be it pain or pleasure, everything is temporary and hence need to be savoured gracefully.

While the Gudi Padwa festival fills us with enthusiasm for a for a fresh beginning, it also gently bolsters us for the bitter-sweet experiences the new year has in store for us.